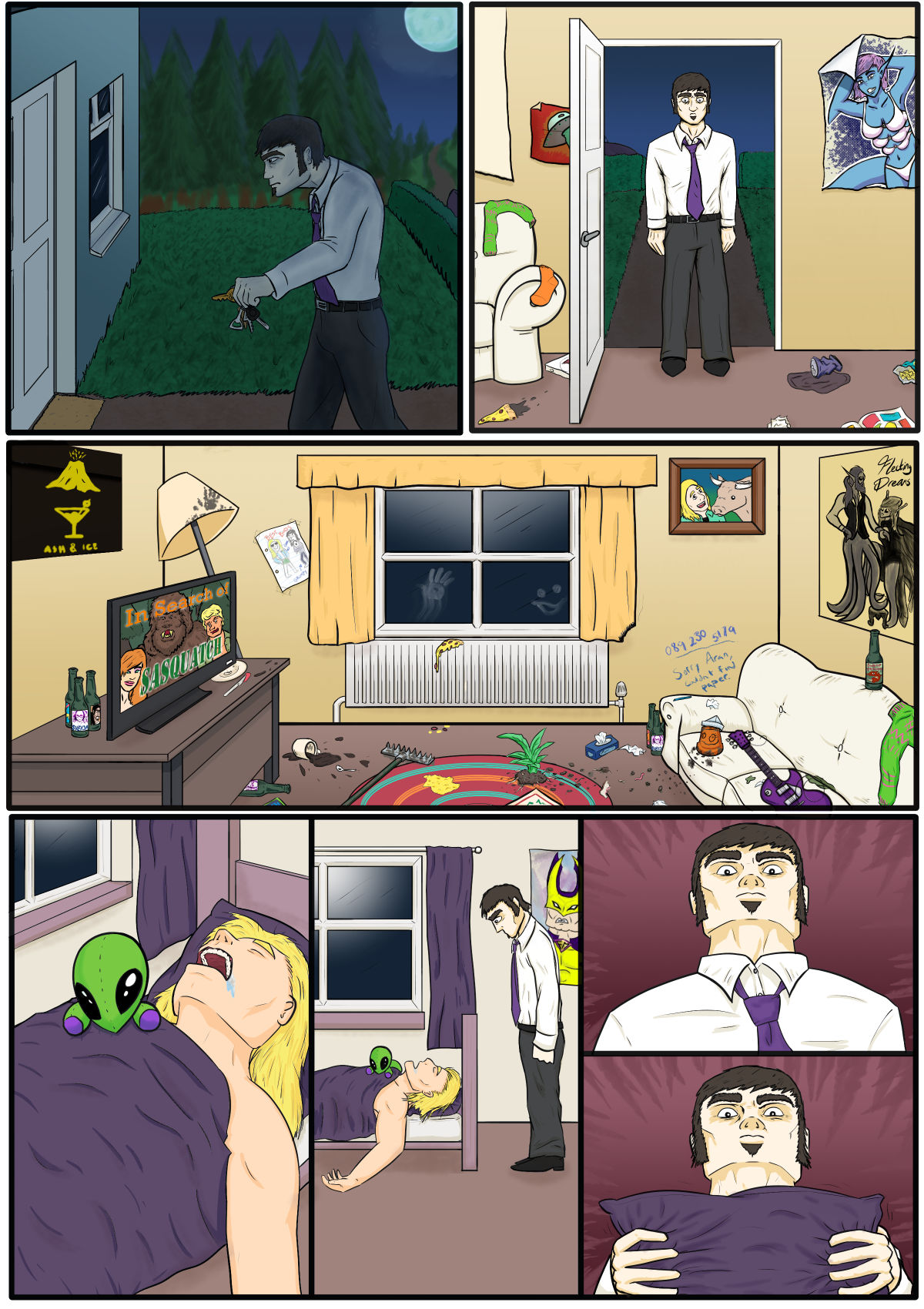 snuffysam
Sometimes, you just need to manifest a pillow to smother your roommate. It happens.

S_Weirdo
Main Squeeze
Boob Physicist
Hnnnnngggg, you didn't announce the page on the app! Or anywhere else! Hnnnnggg... But it's a cool page. I still love the flower pot. And Mr. Bojangles. :)
And the whole general mess. Also, the improved boobs on the poster :P
Can't wait for the next page. :)

Aran_Froggatt
Creator
Thank you :*
Oh, the notification thing broke... Weird. I'll try it again.
And the improved boobs didn't happen by themselves! You didn't earn that title for nothing!

MadJak91
Hardcore Arkian
Aran earns all the money while Kyle derps around, right?
The second and the last two panels say it all. Honestly, this sucks. Aran is probably barely getting anything worth his skill while balancing on the thin line of getting fired and Kyle... eats all the money away.
While I was lucky, I know people who really struggled this way but what is funny is that they never kick out the other person. They are sill friends even though Kyle should just look at it all for real.

Aran_Froggatt
Creator
That's pretty much the situation, Jak. And it sucks. It seems incredibly unstable, so I don't think it's gonna last much longer than this page XD.
Thankfully, this isn't reflecting my real-life situation. I would have used that pillow loooong ago if it was.
After a rough day at work, I think Aran will take this out on Kyle and finally make up his mind on how to react to his mooching.

Kyle_KC
Creator
The Real Kyle
Fortunately i dont reflect my comic counterpart too much.

artemisia8989
Mad
No, seriously... He's there drooling while his friend works his ass off?! Kyle deserves that pillow. He deserves it! Maybe, when he'll wake up and see him standing there with a pillow in his hands, something will change. Or it won't.

...I have a feeling that it won't. Not completely, at least! XD

Aran_Froggatt
Creator
I could make this comic REALLY short if I wanted to.. If I just use that pillow XD
But yes, I guess you're right. This arrangement with Kyle is unsustainable, and something has gotta give. It'll probably happen pretty soon.

Bogus
Not a lot to see at first glance but then I notice the home brew. I deduce this since it has labels of what appears to be Aran and his girlfriend. So it seems Aran has a hobby.
I learn that a Sasquatch is another name for bigfoot and ponder over its existence.
Arans body posture tells me he is perturbed even before opening the door, perhaps he sees the hand print on the window and recognises the warm evening could not result in condensation with which to draw with - so likely grease. Kyle then amused by his ability to make visible staining on the glass then does a little smiley face for his personal amusement. His drawing ability is limited as can be further seen by his 'best buds' picture - also for his personal amusement.
The title 'fleeting dreams' seems at first to relate to Kyles short lived nap. Yet we see this is not the case unless there is a double meaning.
I notice how clean and tidy Kyles bedroom is so I feel there is more going on between these two characters - has something driven him to purposely annoy Aran?

Aran_Froggatt
Creator
That comment amused me greatly. Thank you for taking the time to share your thoughts, friend.
Your skills of observation are notable, and I'm glad the subtleties of the page were not lost; I put a lot of thought into it.
I'm glad someone spotted Svenja's (second) little cameo on the bottles, and you're very close with the other labels. The ones that resemble Aran are actually an old sketch I had of a friend's Dungeons and Dragons character.
Yes. Respect the 'squatch.
Also very observant about the grease on the window. I'll admit, I never really thought about Aran spotting that on the way into the house, but it has now changed my perspective somewhat.
Also glad somebody saw the 'Best Buds' picture! Again, I was afraid a lot of these details would be lost on most readers.
I like that interpretation of the title.. Both referring to Kyle's blissful slumber and the Fleetwood Mac ripoff poster. Honestly, I never made the connection with Kyle's nap and the title. Well done, sir.
Well, funny you mention that his room is so clean, because that's actually Aran's room, as pointed out on page 7! So yes! That is an indication that he either really doesn't care, or that he is purposely doing everything in his power to annoy Aran.
I think Kyle is just a big manchild, though. Maybe he doesn't even have that capacity for malice. He could just be completely naive about the responsibilities of sharing a living space with someone.

Thank you for your comment, it gave me great joy to peruse it.

Aran_Froggatt
Creator
Do you WANT the comic to end here? ...Don't answer that.
But It's not gonna turn out well if you encourage that murderous streak.