Comic 10 - Nothing Rhymes With Purple 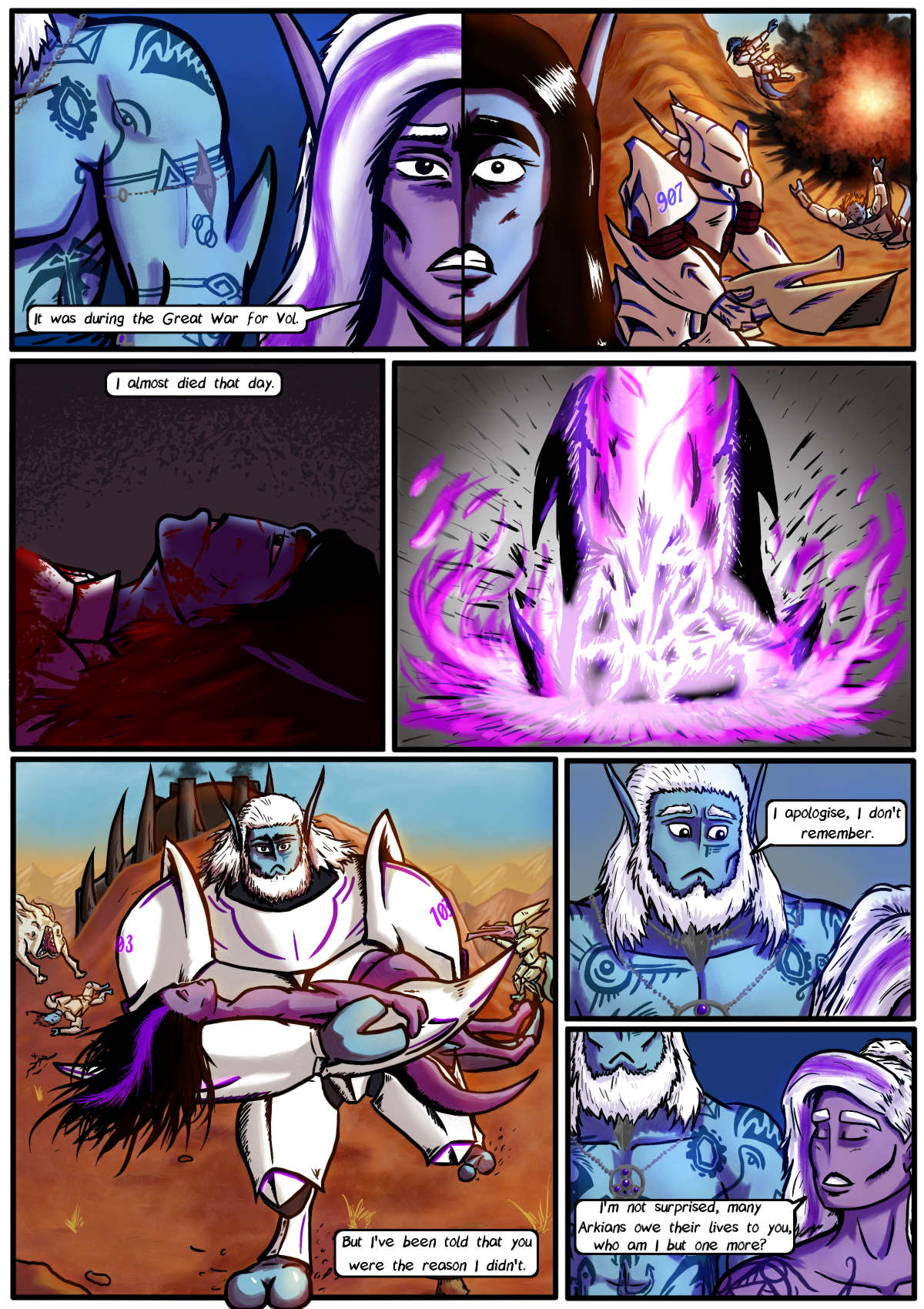 S_Weirdo
Main Squeeze
Boob Physicist
A new page, a new page!
The explosions are really cool. And it still looks like there is some Triberus-like being in the shiny violet light. Also the panel where the female knight almost dies is just really impressive and awesome.
And I feel pretty sorry about how she doesn’t feel she is special or stands out in some way. Because she does. She is awesome!
The landscape in the background also looks really cool. The mountains seem quite intriguing.
I wonder what’s going to happen on the next page. Looking forward to it! :)

Aran_Froggatt
Creator
Thanks so much for your comment! I forgot to reply to this! Coulda sworn I did, but I must have done so privately. This is one of my favourite pages, there are a few panels on this that I really like. One of them being the panel where the female knight nearly dies, and others being the explosion and the knight carrying the other. I also enjoyed the doing the landscapes and the lighting!
I feel like a pig now for not being seen to reply to you, sorry XD

ranger_brianna_new
Unsung Chronic Hero
As a long-lasting veteran of online communities who has made it her goal to help people, I actually empathize with that lack of recognition.

The trope, But for Me, it was Tuesday is usually thought as a villainous one, to establish the nature of the villain: they're so vile and evil that the heinous act forever changing the protagonist's life was just another day to them and not noteworthy at all.

...And yet, that same exact trope can apply to chronic heroes, too. How can you realistically be expected to remember everyone you've helped?

I know that I can't. God I wish I could. But they slip away with time, as I focus more on what I continue to do, rather than on what I did in the past.

Aran_Froggatt
Creator
Thank you for the comment, I've given you a title and everything.
Funny thing, I had never seen Street Fighter! I'll have to make sure it's on my list. It's good you feel you can relate to the characters, too! I must be doing something right!

ranger_brianna_new
Unsung Chronic Hero
Honestly, there's so many Street Fighter adaptions that you can spend many hours on them. The live action film is pretty notorious, though. It's one of the most infamous video game films of all time, basically among the classical examples of "why movies off of video games suck" to people.

Still has a bit of a cult following though, from my understanding.

MadJak91
Hardcore Arkian
Dat fourth panel, son! Also liking that beast over there in the back :>
Creatures are cool!

More heavy load to bear. I guess it really depends on the person so we will see how he is taking it but... being a hero of this scale can be a curse. Not only used by others but also suddenly reminded of your heroics to the point that people start to EXPECTING them instead of them happening because you want to. And once you fail for once....

Aran_Froggatt
Creator
Good to hear you're enjoying the art, Jak! It was really fun. And I bet the knight is wishing he just kept his head down and didn't make himself such a hero, he could sit back and relax while the druid picked someone else to go to earth! Good point about the expectations, too, he was never asked if he wanted the privilege, he was just told! Expected to just drop everything for duty. Thanks for the comment, Jak

Mark_Edwards
Sexy Man
The wait was well worth the new pages. :D

Also REALLY loving that armor design. You need to make sure this comic becomes world renown just so I can cosplay as an Arkian warrior.

Aran_Froggatt
Creator
Thanks, Mark! Who knows? I might release a DIY Arkian armor kit. It's certainly not outside the realms of possibility!

Pip
The Coolest
Quite a nice looking page!

It raises one question though... I can't figure out why the aliens have arabic numerals on their armor. Is the text on the suits translated for the reader's benefit? Or does it indicate that humans and aliens actually use the same writing system? Because that might have some interesting worldbuilding implications

Aran_Froggatt
Creator
Thanks for the comment, Pip! I always enjoy hearing from you. I even gave you a title. Glad you liked this page, it was a lot of fun!

And also, good question, I can trust you to point out little kinks like that. I actually did think this through, because the numbers become important later on, and there IS a reason why they're arabic numerals. There have brief mentions of Progenitors thus far, an ancient, extinct race whose influence across the galaxy was pretty substantial, and the Arkians kind of herald them as ancestors or almost demi-gods. The idea is that they wouldn't necessarily have had contact with the humans, but the legacy and relics left behind weren't totally lost, the Arkian and Human cultures are both influenced by the Progenitors in some ways. I would go into greater detail, but that's some pretty end-of-plot stuff.

Again, thanks for commenting, Pip, and thanks for asking the difficult questions :3

hrwilliams
This is epic storytelling!

Aran_Froggatt
Creator
Thanks, hrwilliams, glad you like it, there's a lot more storytelling to come!

artemisia8989
Mad
Nice work! Your comic looks really good and I like the art style. In some parts it appears almost stiff, but I guess it's part of the way you draw, because it makes the characters more expressive. I usually prefer smoother lines, but I still like this.

I particularly like the subtle meaning behind this page. It makes me think about the fact that, during war, the heroes are remembered, but society tends to forget that a lot of people fought and died.

Aran_Froggatt
Creator
Artemisia, welcome to ComicFury!
And thank you for the comment! I'm glad you like the visuals, but I really don't know what I'm doing, hence the stiffness and general awkwardness of the art. I'm trying to just do what I think looks OK, I was never taught any of this stuff.
And I'm also glad that you caught onto the kind of undertones regarding war, too, a lot of glory, but not much consideration for those who weren't lucky.
Victories are often looked back upon with rose-tinted glass, and those beneath the heroes are soon forgotten.

Anyway, thanks again for letting me know what you think!

Spelledeg
Space Babe
I really really like that 4th panel with the big guy carrying Eve, it's really expressive and does wonders to show the war scape. Good work, Aran!

Aran_Froggatt
Creator
Thanks Spelledeg, glad you liked it, and I appreciate the feedback :3 this was a fun page to make, never attempted many landscapes before, but I had good old Bob Ross showing me how to do the mountains. I've also given you a title!

AugustaCaesar
Owed Fanart
Your details are magnificent. I also enjoy the simultaneous, 'what is happening on Earth versus Outer Space' dichotomy.

Aran_Froggatt
Creator
Thanks for the comment! I'm glad you're enjoying it, I'm finding it difficult to stagger the alien vs human events so that they meet up at the same time, but meh, we'll see how it goes.